Finally got around to putting up some pics of progress. Finished my Marauder, started work on both the Juggernaut and the Destroyer, and I completed my Warcaster, Prime Sorscha. There are a couple spots I am unhappy with on Sorscha, mainly the eyes and face, I tried for a blueish glowing effect and it is not to noticeable or defined. All in all though, I am pleased with my progress. C&C welcome.

Thanks,
Support By Fire 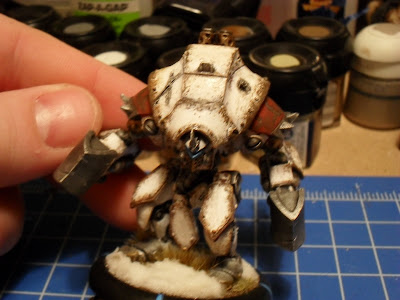 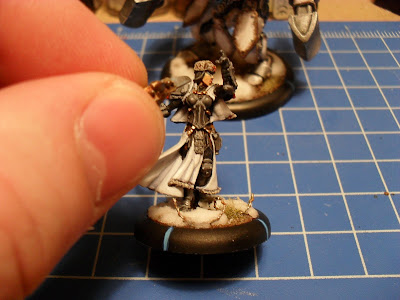 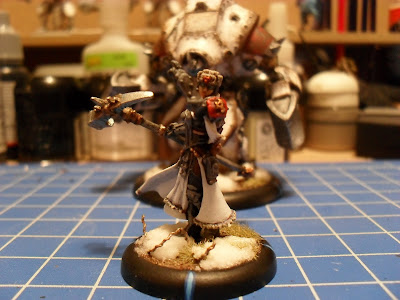 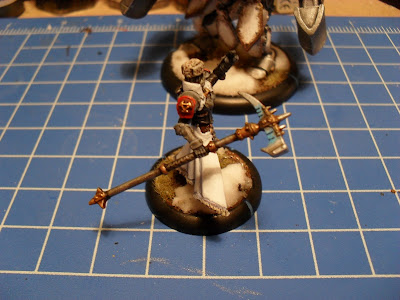 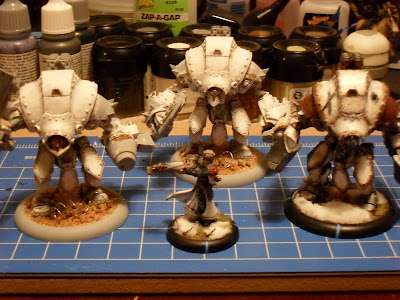 Well, I have gotten all of my Khador assembled and primed now. Later tonight I will post again after I work on my Marauder some more, and to give a review of a new primer that I have just tried out. Not much else going on of late, no games unfortunately, my Dad and I decided to play some Squad Leader(an old Avalon Hill board game) instead. I have been on Vacation from work this week, and with some half decent weather, wife and kids have kept me busy, but I will make some time to paint tonight.

Here is an update on my KHADOR!

Still very much under construction and in desperate need of painting, I give you my Khador Battle Box, a Marauder, and a unit of Widowmakers. 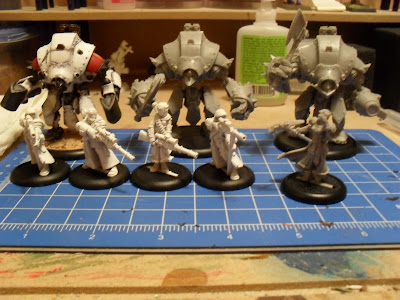 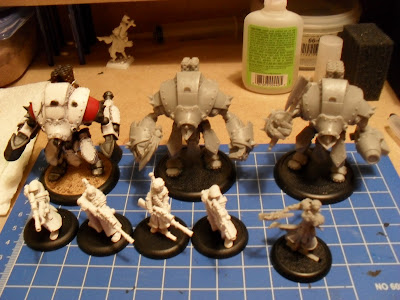 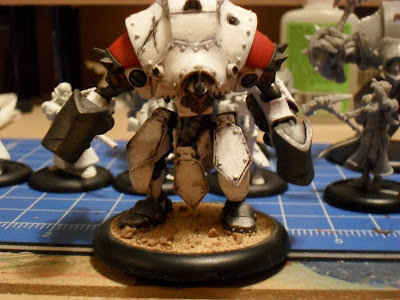 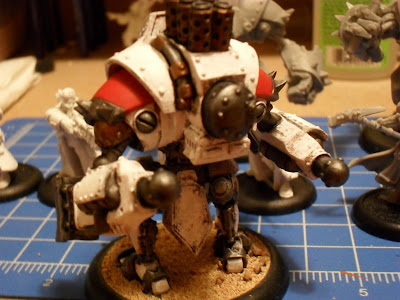 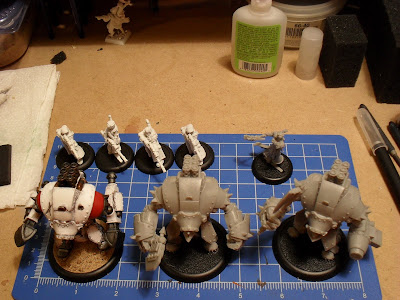 I have gotten in 7 games already and learned a lot in just one day of gaming. I think my next purchase is going to be pButcher, and hopefully a full unit of Winterguard Infantry with Kovnik Joe, but we will have to see how funds go. As for painting, if you notice the scheme used on the Marauder, I have chosen to go with a white wash snow camo scheme. I still have quite a bit of weathering to do on this model, but I am aiming for the look of the Extreme Destroyer's scheme in the FOW Khador book. This will go on all of my Jacks' and I am still deciding on the colors for my Casters and my Infantry, but it will tie in very well. For the bases, i have some snow effects, dead/winter grass flock, and some Highland Tuft from Army Painter along with some razor wire, to create a snowy blasted wasteland.

Well, that is all for now, back to work on my Khador I go.
Thanks,
Support By Fire
Posted by Support By Fire at 2:19 AM 2 comments:

Alright, got some games in with my Brother at out LGS this weekend! Sorry no pics, but I forgot to snap them in the swirling midst of melee. Well, my Bro, was absolutely floored by my birthday gift to him! I gave him basically a complete start up into the game with a fully painted Cryx battle box, MK II rulebook, tokens and templates, tape measure, Sabol Platoon case loaded with foam, MK II Cryx faction deck and a marker for checking damage off. And what did I get for this? He beat me in our first 3 games in a row!!!!! LMAO! But I came back with a vengence with my Khador and tied up the score. We then found a couple of Hordes players to throw down with, one Circle player and a Skorne player. My Bro, took on the Circle player who was running some sort of eKaya list, not sure what it was, but between his feat and Crippling Grasp, he locked him down and forced him to give up before he was totally annihilated. I choose to take on the Skorne player running with pMorgul, a Titan Gladiator, a Cyclops, and a unit of Cataphract, and a solo that was incorporeal(no clue who it was). I ran my battle box plus a unit of Widowmakers. I got the jump on him and almost took out his Titan in one go with my Juggernaut on my feat turn, then he started dropping my Widowmakers down, and then I thought I had lost. He had feated so I could not use my focus and I was too close to him for comfort. I ended up camping focus and trying to put terrain between us, but he caught me anyways! Thanks to my def 16 and arm 20, he only did 9 wounds to me, and I then proceeded to put AX TO FACE! on my first hit I dropped him to 1 life, and then, game over, ASSASSINATION! All in all, great times and great games, learned a lot, and still much more to learn. I will work on getting some pics up of the finished Cryx, and of my new Khador force, and will try and remember to take pics of games.

Well, it appears that my LGS had changed their gaming schedule on me, so my first game of Warmachine is delayed, which isn't all bad. It gives me some more time to finish my brothers Cryx force before i take it for a test spin. In the mean time I have also been working on my new Faction, KHADOR! I have picked up some Widowmakers and a Heavy Warjack kit from the LGS, and I have the Battlebox on order. I plan on painting them up in a snow camo scheme, and putting them on some snow bases, so if anyone has some ideas, or pics for reference, it would be much appreciated. Right now I am pouring through my Khador book, and an old WWII book that my dad gave me, looking for color schemes and ideas. Sorry no pics right now, to busy to snap some pics. Well, back to work I go.

WOW! Sorry for being off for so long...

Life gets in the way some times, but back to the hobby I am. Just because I have been off line for awhile doesn't mean that I haven't been working on the Cryx army. I have finished the Slayer, and am currently working on the last Deathripper and the Defiler. My goal is still set at having them ready for this Saturday, as that will be my first official game (did a little play-testing/learning with my Bro). Here is the big change though, I have convinced my brother to get in the game, which is awesome, the bad news is he only wants to play Cryx! Well, in all my generosity and OCD, I have decided to give him an awesome Birthday gift! He will recieve my Cryx Battle-box fully painted with the Faction deck, pDenny token set, templates, and his own copy of the MK.II Rulebook all wrapped up in his very own Sabol Mini Case! Hope he doesn't read my blog before March, lol.

I guess I need to choose another Faction, anyone have any ideas?

Now for some pics of my Bro's Cryx WIP. 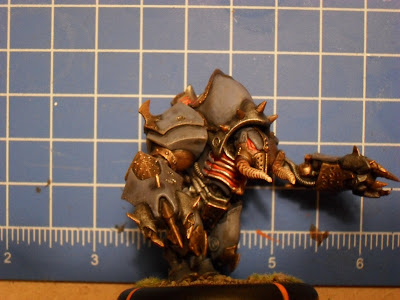 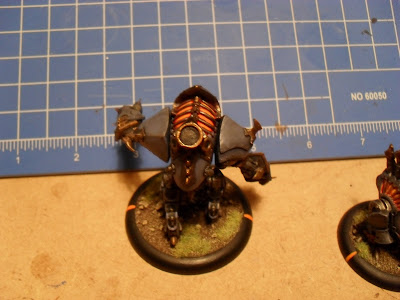 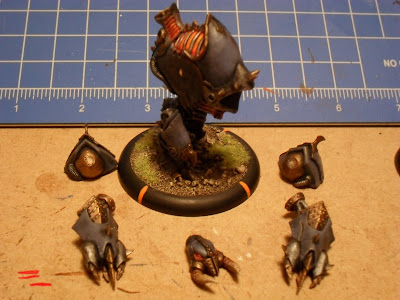 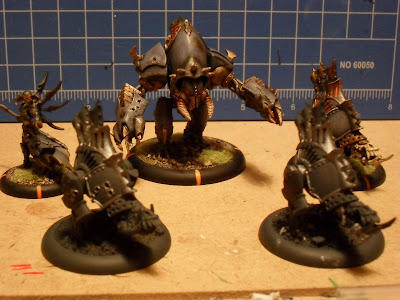 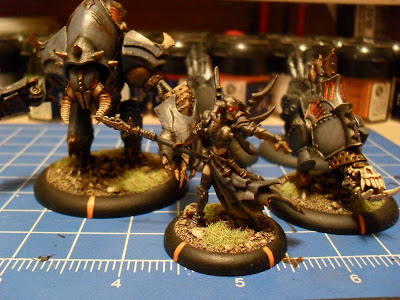 Posted by Support By Fire at 2:12 AM No comments:

Frustrated, because my internet is down and will be down for atleast another week. Thank God for my Blackberry I suppose. Well, I won't be making any updates for a little while, but I am currently half way done with the Slayer, and working on finishing my part 2 of my painting post. More to come as soon as I am back up and running.

Support By Fire
Northern, Indiana, United States
Just needing an outlet and a space to share my modeling and painting with fellow gamers and modelers. Wish i could get more time to play games. but young kids and work take up most of my time and energy, but I will still find the time to do what i love.